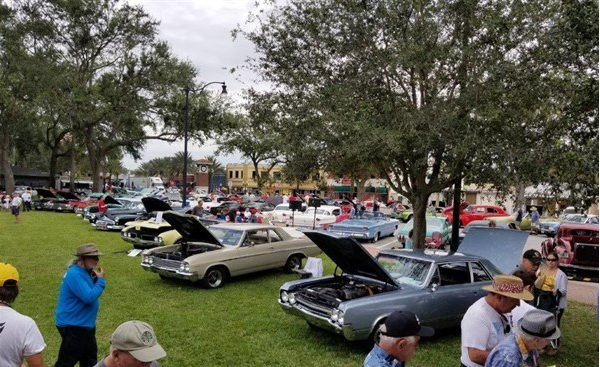 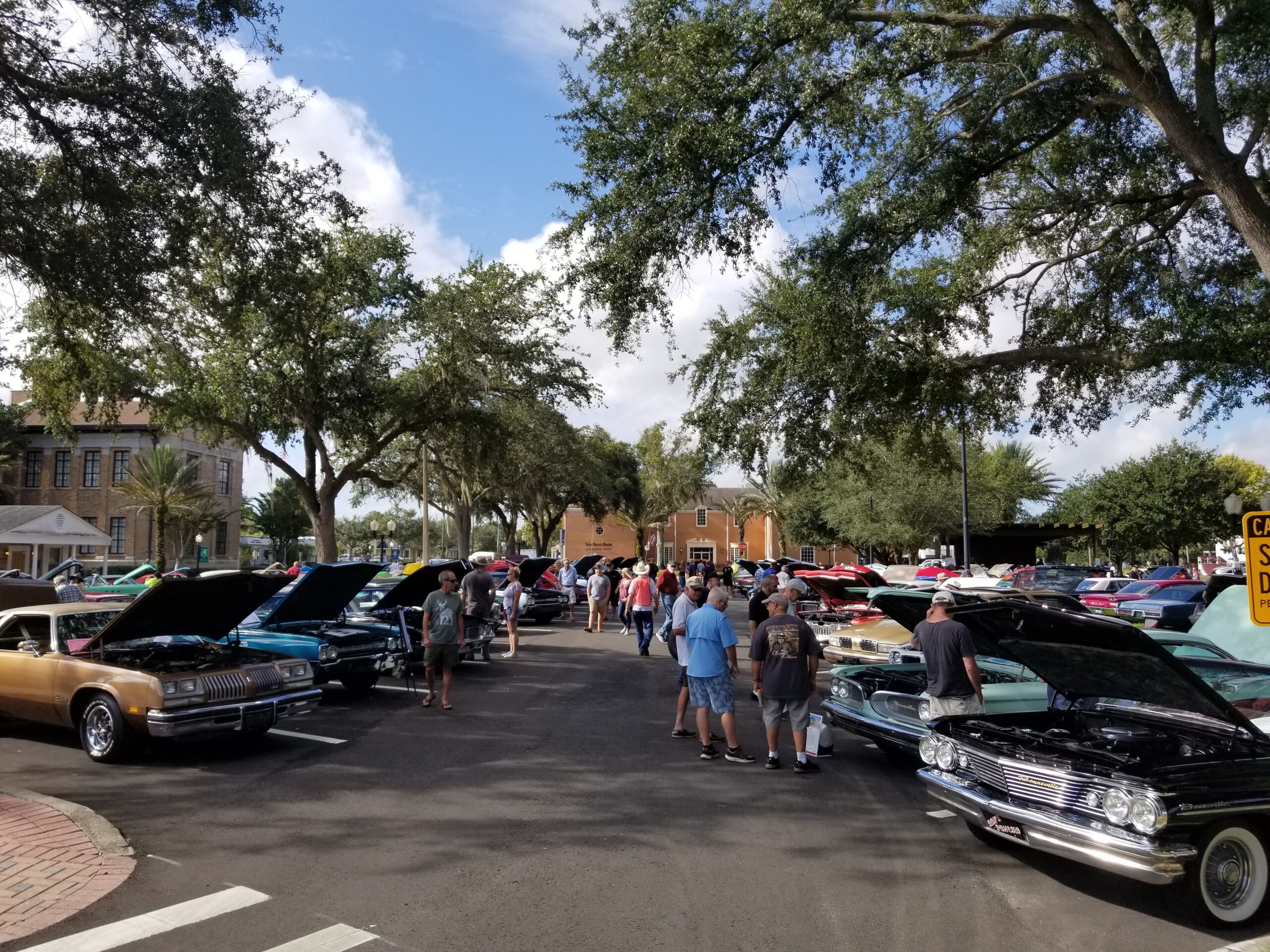 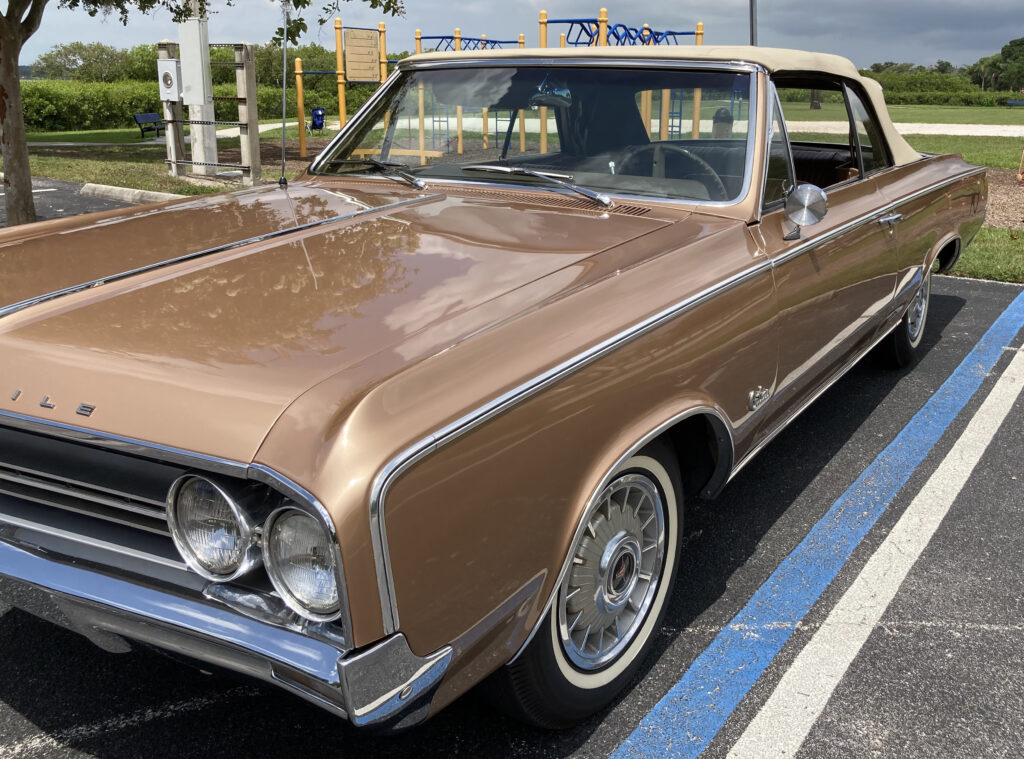 On August 20th Susan and I got up at the crack of dawn and scurried around the house in preparation for a little road trip to NPD for our August gathering, luncheon and meeting.

We headed out the door, and there it sat…our rocket for the day would be “The Draggin
Wagon”, our 91 Olds Custom Cruiser. Coldair, soft seats and a smooth ride! It was the
perfect rocket for the trip; I had surgery 2weeks earlier on a part of my body where the
sun doesn’t shine—that’s where the softseats and smooth ride paid off! (The seats in the 442 are hard as woodpecker lips!) Susan fired off the rocket; we cruised at warp factor 7 and were there in no time! (I said last month you could bring your spaceship so I thought I’d throw in a little Star Trek talk….)

Upon arrival I was thrilled to see a large gathering of cars and Club Members!

We gathered in the NPD Showroom which already had a handful of cars on display and yes, one of them was a beautiful red 1977 Cutlass Supreme! If this was a sample, I knew we would be in for a real treat.

Rick Schmidt, Owner/ President of NPD addressed the Club and gave us a brief history of how his dad Jim got started.

At 14, Jim Schmidt bought a 1928 Model A Ford from a junk yard for $50.00 and started restoring it. At 16, Jim was selling Model A restoration kits to major parts warehouses in the Midwest and driving a 57 t-bird as his first “real car”. In 1976 Jim sold his Model A fastener company and founded National Parts Depot.

The business grew quickly and spread tohave 5 locations throughout the country. NPD quickly became the largest restoration auto parts company in the industry! Like Father, Like Son. Rick joined his father after getting his business degree at the University of Florida (Go Gators!). From a young age, like his dad, Rick had a passion for old muscle cars, especially Fords. (Olds Rockets were probably too fast!) Rick didn’t miss a step and the Father & Son team grew their business and collection of low mileage, original from the factory cars of all makes and models…. Much to our delight!

As we rounded the corner and entered the 160,000 Sq. Ft. warehouse (with Rick as our personal narrator), we saw row a>er row of beautiful cars, some restored but mostly low mileage originals. There were 3 sections of the warehouse LOADED with mostly American iron from days gone by. If you missed this meeting, you missed a great me and experience!

I’m happy to say that we had 30 Members present at NPD! From there we cruised to Bob Evans for lunch and a Club Meeting. We were fortunate to have everyone gathered in a group in a part of the restaurant that was semi- private. We had 25 members in attendance for the meeting including new Members, Nancy & Ed Smith, we also had 2 other new Members who didn’t make lunch but were at NPD, Carol & Dick….. Sorry, they didn’t sign in so we don’t recall their last name. Anyway, Welcome to the Olds Club of Florida! We look forward to seeing ya’ll at future meetings and events!

Lunch was a great social gathering; there was plenty of talk and laughter. After everyone introduced them- selves, we jumped right into the meeting. The main focus of the meeting was the BOPC show hosted by the OCF.

Time is running out and there’s still a lot to do. October 22 will be here before we know it and we’re hoping to hit another home run with this year’s show! If you want to come early, we have a block of rooms at the Comfort Inn and Suites on US Hwy. 98 N. Lakeland. The rooms are held until October 1st, so book sooner than later. We will still be in need of volunteers for parking and various other chores so please lend a hand after you have parked your car on the show field. We are also in need of donations for door prizes and the auction. If you or someone you know is willing to donate any items it will definitely be appreciated. If the donation comes from a business, we will promote that business during the show in the program, at the presentation, and through the DJ.